Another "unification surprise", with clausal complement

And again I can’t figure out why I am having a “unification surprise” (something is not in the chart but interactive unification seems fine).

This time, I actually don’t want the sentence (Ivan thinks that who bought the book), and in the trunk version of the Russian grammar, I don’t have it. In my current version I am suddenly getting it: 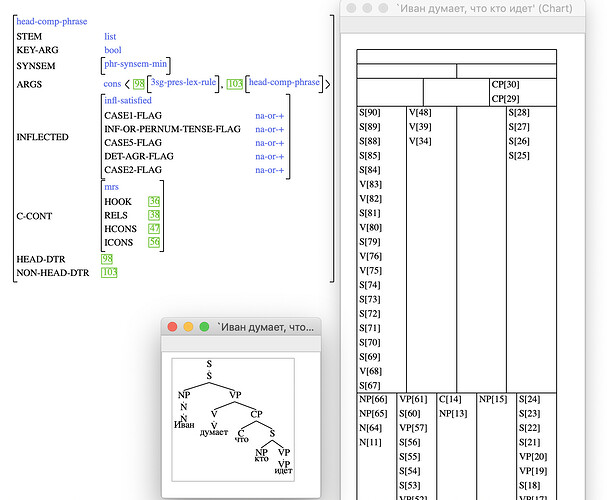 The tree is from the current version of the grammar. I kept it open. I triple-checked that I have the trunk version loaded in the LKB, where the sentence does not parse. The chart is from that parsing attempt, and you can see that the VP that has the CP as its non-head daughter is not in the chart.

The unification result is from putting the upper V as the head daughter and the correct CP as the non-head daughter into the ARGS slots of the head-complement rule. Again, I did triple-check that that is the grammar that does not yield a parse.

I did recently make one change to the head-complement rule, but that was simply to propagate the MODIFIED feature; I doubt it could have this sort of effect? The other change (less recent but as of yet untested in Russian) is that there is no longer a head-valence phrase and instead there is the explicit append of non-local features. I also don’t know how that could have this effect. This sentence should be blocked by the WH feature, and I certainly haven’t made any changes with respect to it…

It might be that the complementizer isn’t properly getting the QUE value; I will look on Monday, but why the unification surprise?..

I suspect that the interactive unification machinery does not know what to do with the logical-or type, maybe. I will need to check later whether that’s just LUI.

I don’t have time to properly look into the examples you’ve been posting, but I just want to say that the unification machinery should not need to do anything special to work with logical-or, append-list, etc. They are defined in just the same way as any other type. (If the problem really is to do with the unification machinery, then interactive unification should give the wrong feature structure.)

Have you checked the value of deleted-daughters? (see here)