Determining ordering of adjectives in an MRS conjunction

Thinking more about the case of adjectives which do “little q quantification” as we’re discussing in this thread, I’m noticing that at least these types of adjectives don’t seem to be associative when they are represented in a conjunction.

“Minimal Recursion Semantics An Introduction” seems to imply that ordering doesn’t matter by using the term bag (and not saying anything else about ordering with the bag that I could find):

An EP conjunction is a bag of EPs that have the same label.

In the h8 conjunction in the MRS for “There are too many red rocks”:

both _red_a_1 and much-many_a restrict the x4 variable, but give very different results depending on what order you put them in.

English syntax seems to order them but it seems like this is lost in the MRS? Maybe I don’t know how to look for it.

Does the ordering in the generated MRS matter? Is this a phenomena where you need to post-process the conjunction and “know” ordering based on the type of predication? Something else that I am missing?

There are a lot of relevant responses here, hopefully some of which others will give, but one point is that the MRS stores a bag of EPs but that doesn’t meant that all information that is encoded in word order (in English) is lost. For instance, verbal arguments are encoded in English via word order (“I like apples” encodes via syntax the information that “I” is the subject, “apples” is the object and that information is stored in the MRS as the ARG1 and ARG2 of the “like” EP). Similarly, the same information could be encoded differently in a different language (or in multiple ways in the same language) and we would still want the MRS to be the same.

In general the relative ordering of adjectives isn’t stored in any way in the MRS but it could be constrained in the syntax, so I’m curious what others have to say about how the ERG works

Thanks @trimblet! Just to be clear, I’m really only asking about how to determine the ordering in a conjunction in the MRS. I.e. when a few of the EPs have the same label.

Edit: I fixed the title to make that clearer

There is a large literature on adjective ordering preferences. For some pointers into the literature, you could look at this paper with a former student of mine: 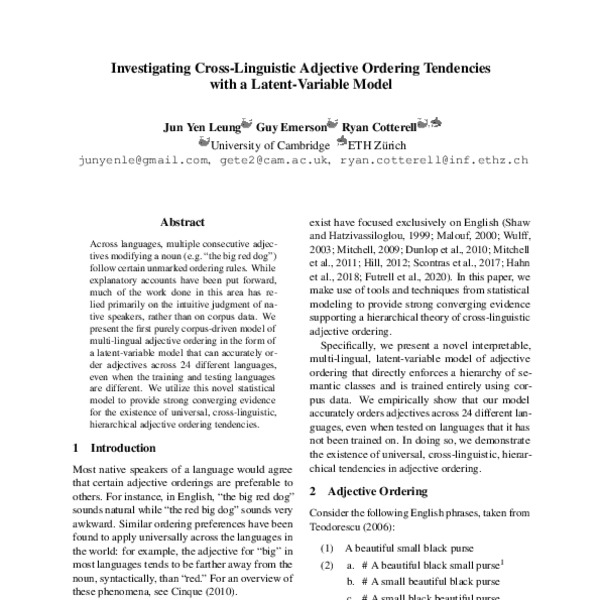 “red many rocks” could mean a single rock if there are many rocks, one of which is red

I really struggle to see how it could be interpreted that way. But I also think that order sounds really bad.

“red many rocks” could mean a single rock if there are many rocks, one of which is red

I really struggle to see how it could be interpreted that way. But I also think that order sounds really bad.

First: Thanks for the pointer. Reading through that first document, my takeaway is that a “unified theory of adjective ordering” is still not agreed upon but there are strong contenders in English at least, and the “class” of adjective I’m talking about here would be placed near the front, before “non-grouping” adjectives. I understand that the MRS isn’t going to enforce any of this but that speakers might, and that will get reflected in the MRS based on surface order.

For the “red many rocks” point I made: I am still trying to get my head around how to think about plurals and words like “many” but here was my logic:

Then, in a world where you allow red(x) to pick items from an object that is a set of (say) 4 individuals and return the one that is red, you get: “red many rocks” could mean a single rock if there are many rocks, one of which is red. Presumably, this is the wrong semantic for red, and it should apply to the whole set, in which case the problem doesn’t occur.

Really, I am just trying to understand what the “MRS algebra” gives me in terms of ways to solve MRSs with these types of grouping adjectives like “many”.

I think a better question would have been: does the MRS give me a way to always order adjective terms that deal with groups (like “many”) so they are processed after terms that don’t so I never run into this problem in the first place.

And the answer is: the MRS doesn’t enforce it but most speakers probably will (in English at least).

Presumably, this is the wrong semantic for red, and it should apply to the whole set, in which case the problem doesn’t occur.

The semantics of the word “red” is called intersective by Partee 1995 because “red X” basically refers to the intersection of the set of red things and the set of X things. So, it’s not really about selecting a particular individual. “The many red rocks glimmered” or “Red roses are beautiful” both definitely refer to more than one instance of rocks and roses in both cases. I wrote a bit more background on this sort of adjective semantics in my MS thesis, section 2.2.3.

Since then, one case you might be interested in that I’ve come across is “first disastrous term” versus “disastrous first term,” which I think is due to ordinals like “first” having subsective semantics such that the order does matter. But, the ERG doesn’t distinguish between these and the MRS for “his first disastrous term ended” licenses both orders during generation.

Really, I am just trying to understand what the “MRS algebra” gives me in terms of ways to solve MRSs with these types of grouping adjectives like “many”.

What we usually call the “MRS algebra” is a system for composing MRSes, so that we can compositionally derive an MRS for a whole sentence, based on the parse tree and the lexical entries. The algebra doesn’t tell you how to interpret an MRS.

The simple answer would be: red(x) is true of a plurality x iff red(y) is true for every y<x. I say “simple” because so-called “intersective” adjectives actually behave subsectively when you look closely, and you can also get collective readings (discussed in the other thread) which don’t decompose like this. Whether or not you want to deal with more complicated cases is another question. In general, defining “entities” (including pluralities, parts, kinds, events, etc.) is a difficult problem and I don’t think formal semantics has a complete answer. MRS would be compatible with various possible answers.

OK, good to know. Looking through MRS an Introduction I think the term I might be looking for is “MRS Representation”, meaning: the rules by which valid MRSs can be created and what they can express mechanically. Maybe “MRS Semantics”?

Things like “scopal arguments exist, variables are always scoped by exactly one quantifier, QEQ constraints must be followed, conjunctions can exist on nodes, there are properties on variables that provide extra meaning” etc.

Or maybe even just “MRS”

“MRS representation” would refer to a particular structure for a given sentence, rather than the formalism as a whole.

I agree with @guyemerson: MRS representation is a structure that represents a sentence, or some set of meaning-equivalent sentences. MRS Semantics is a bit redundant and also doesn’t really get at what you mean. FWIW I used DELPH-IN Semantics in Chapter 2 of my dissertation to encompass the general semantic framework underpinning all of our semantic variants (MRS, RMRS, EDS, DM, DMRS), but I also think this is not the term you’re searching for.

Things like “scopal arguments exist, variables are always scoped by exactly one quantifier, QEQ constraints must be followed, conjunctions can exist on nodes, there are properties on variables that provide extra meaning” etc.

These mostly sound like well-formedness constraints or principles of MRS construction. Copestake, 2005 also talks about definitions of well-formed structures.

If you’re using PyDelphin, there are some functions in the delphin.mrs module to help. There’s also a brief description in the guide portion of the docs.

I’ve definitely heard a lot of grumbling in the past that the well formedness constraints are not as strict as they could be. But what I think @EricZinda is really looking for isn’t just well formedness constraints but also basically rules of interpretation, in a programming language sense. I think the well formedness rules have fairly large coverage and combined with the ranker will probably be great, but I’m not familiar with any existing rules for interpretation in the same sense that e.g. a Python AST gets executed.