The door is hardly open

I initially thought of two possible interpretations: the way the door was opened (the way the process happened) vs how the door is open (the state of the door).

and three analyses in ERG 1214. At the “semantic level”, I have two decisions: _hardly_a_1 vs _hardly_x_deg 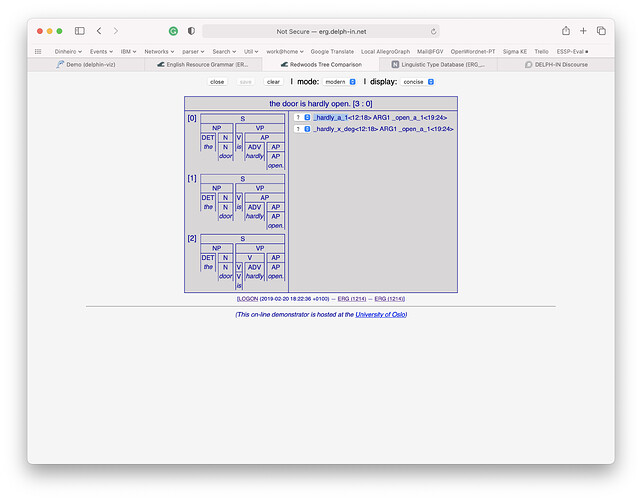 At the “syntactic level”, I need to decide between two lexical types

But documentation is hard to understand.

For av_-_s-vp-x_le it says Scop, VP w/aux head . Does it means scopal, VP with auxiliary HEAD? If so, what does it really means? According to http://moin.delph-in.net/wiki/ErgLeTypes the av_- means adverb without complement. But what is the s-vp-x part?

For av_-_dg-jomv_le it says Deg, just-only-very-much. This is not really an explanation, right? Deg should means degree. Once more is an adverb without complements but dg-jomv is not documented right?

The two interpretations you suggested would work for the “the door is closed” (a state versus a process), but “open” only means the state, in contrast to “opened” for the process. (I can’t pretend that English is sensible here…)

The door is fully/very/fairly/somewhat/hardly open.

The scopal reading indicates the degree of certainty:

Admittedly, these two readings basically apply to the same set of doors… I can hardly distinguish them

which is why I’ve given the contrasting alternative words.

I’m not sure about the parses that give the same semantics.

What the scopal and nonscopal here means? I mean, what is the effect and reason for a predicate be nonscopal or scopal. Is the scopal always related to the modality?

The “background” section of this page may be helpful (but the following discussion on that page may raise more questions than it answers).

If a modifier can change a sentence from being false to true, it’s scopal. Modal operators are scopal. If someone says “The door is open”, I could reply “The door is hardly open” to mean something like “No, unless you take a very loose sense of ‘open’, it’s not open.”

But as the “problem statement” of that page says, “While we feel that some items are fairly clearly in one category (scopal modifiers) or the other, we find it difficult to categorize many other times.” I’m tempted to put degree modifiers in the difficult category…

@arademaker my thesis briefly discusses the problem from a bit of a different point of view than the link Guy provided, namely adjectives instead of adverbials (in fact, @Dan even said no talking about adjectives during that discussion

), see numbered pages {3, 4, 9, 10}. A key syntactic difference that adjectives have that might make it easier to understand the distinction is that adjectives can be the main predicate of the sentence:

Using the semantic tests from the above link on (2):

These distinctions are definitely very tricky

The distinction between adverbs and degree specifiers is one of the most vexing in the ERG, with few satisfactory known tests to distinguish among them, so alas one often gets more analyses than can be readily justified with words such as “hardly”. This word does need to be a degree specifier at least for “hardly any cats slept” where noun phrases are not normally modified by adverbs, and perhaps also for “She was hardly ever here” where adverbs are not themselves so readily modified by other adverbs. But adjectives can be adverbially modified, so it’s not clear that the sentence “that door was hardly open” should get an analysis with “hardly” as a degree specifier. As a separate note, I find this example sentence awkward, and it’s not easy to think of adjectives that are really happy with “hardly”, especially in attributive uses: “?Kim is hardly tall”, “*The hardly angry cat ran away”, “*We considered Kim hardly clever”. So maybe “hardly” is not the ideal prototype for trying to distinguish between adverbs and degree specifiers combining with adjectives. Messy, as others have noted.

And I still don’t have a good working model for if and when adjectives should be treated as scopal, but I’ll look again at your thesis, @trimblet. Note that so far, the ERG does not include any scopal adjectives.