How to implement subject control verbs in a Grammar Matrix-based grammar?

Hi! I’m trying to to implement subject control verbs in the Portuguese grammar I’m developing (in collaboration with @arademaker) using the Grammar Matrix customization system. It is a well-known fact that this system only supports the implementation of subject raising verbs, not of subject control verbs, as exemplified in (1) and (2), respectively (examples from Sag, Wasow, and Bender, 2003, p. 366 and p. 371):

The core matrix.tdl file, however, does provide a type which can be manually adapted into a subtype in order to handle subject control verbs:

Based on the type subj-raise-aux created by the customization system for subject raising verbs, I created the following type:

The type noninh-refl-verb-lex is inherited by verbs that undergo inflection in the morphology and forbid the attachment of an expletive reflexive clitic (used as an unaccusativity marker by the intransitive variants of some inchoative-causative verbs, e.g. abrir ‘open’). It was created by the customization system from the choices I had specified.
In order to handle subject control verbs subcategorizing for a bare infinitive complement, I also created the following type:

The thusly modified grammar was able to parse sentences such as

However, as I anticipated, the MRS generated is not correct: 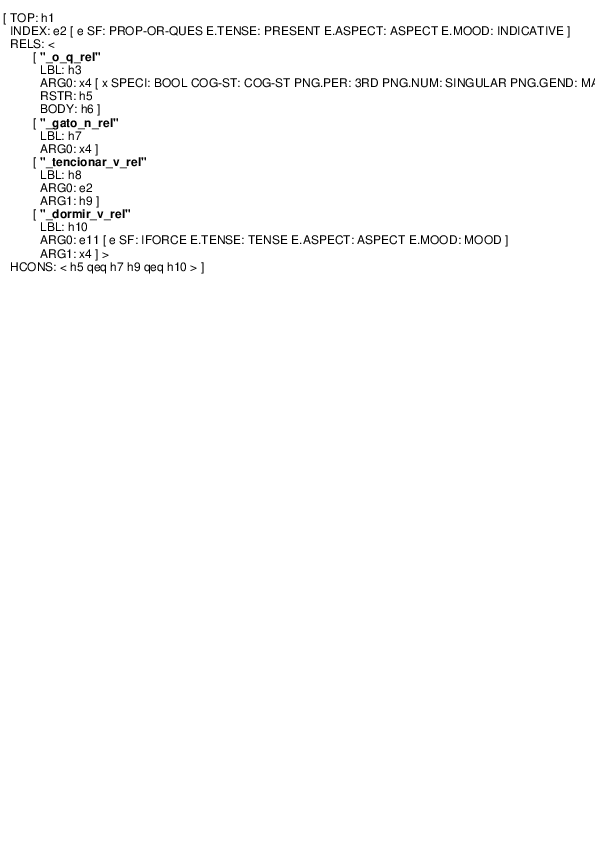 tenciona_mrs595×842 7.36 KB
The subject control verb tencionar ‘to intend’ should have not two, but three arguments, i.e., the cat should also show up as an argument, as in the analogous English sentence parsed by the ERG.
Does anyone know how I could get the MRS right? How can I specify that the subject of the matrix verb is also one of its semantic arguments?
1 Like
ebender September 7, 2021, 10:07pm #2

I’m quite puzzled, because the trans-first-arg-control-lex-item type you are showing links the ARG2 of the matrix verb via a qeq to the LBL of the embedded verb, but somehow that relationship is showing up as involving the ARG1. Meanwhile, in that same type, the ARG1 should be pointing to the first ARG-ST elements INDEX and your subtype has correctly identified that ARG-ST element with the item on the SUBJ list. Are you sure those types are being invoked in the parse that gives that MRS?

Thanks, @ebender. Your suspicion was correct. The types were not being invoked. I had implemented with the questionnaire all verbs governing a bare infinitive complement as auxiliaries (i.e., raising verbs). I wrongly assumed that the subject control verb tencionar ‘to intend’ was not among these verbs and forgot at the same time to load the manually created lexical entry for this verb. Therefore, the MRS displayed was of a subject raising verb.
This is the MRS now being generated: 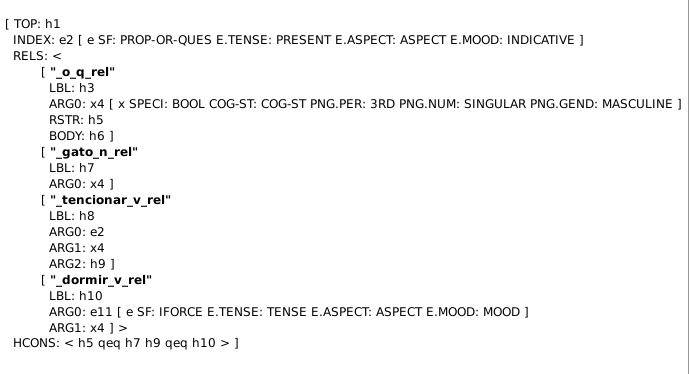 It seems correct to me.

The MRS looks good to me, too. Glad it’s working!