In-situ wh-words in languages which also do extraction

but that doesn’t load; the geometry is wrong I think because FIRST is only introduced for subtypes of list…

You need to build something parallel to olist:

But that’s either not quite right or I am not using it right:

because I still have the head-adjunct rule taking a wh-question as its head daughter, like in the left tree (again, pseudolanguage below): 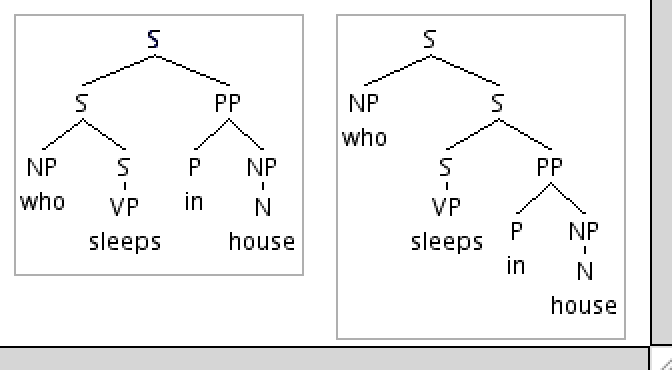 That’s what we’ve been trying to rule out, right?

Well I guess not, because if it is a question sentence, then its SUBJ is in fact empty… Hm.

Let’s make up a new feature, called L-QUE, which is appropriate for all signs. In phrases, its value is the same as the QUE value on the first element of ARGS (i.e. the first daughter). Would that do what you need?

Yeah! That works well except like you said, it breaks the V-initial sentences. But those I really have long wanted to license by some information structure rule which puts heavy stress on the wh-word. So I kind of am not sad to lose them at this point.

But that’s either not quite right or I am not using it right:

because I still have the head-adjunct rule taking a wh-question as its head daughter, like in the left tree (again, pseudolanguage below):

That’s what we’ve been trying to rule out, right?

Well I guess not, because if it is a question sentence, then its SUBJ is in fact empty… Hm.

I thought you were trying to rule out order of application ambiguity between subject extraction and modifier attachment. That’s what clist should be good for.

I thought you were trying to rule out order of application ambiguity between subject extraction and modifier attachment. That’s what clist should be good for.

With this change (adding L-QUE.LIST < > on head-adjunct’s head daughter, I didn’t get any regressions in my Russian test suite but I may be missing the right test items…

Does it sound to you like this is reasonable or does it sound I’d be ruling out something good?

Or would it rule out something good…

So if instead of type append-list, we want to propagate an additional boolean value WH +/-, so as to ultimately rule out WH + items in the left periphery of head-adjunct and in-situ-question clauses, where should such a feature live on the lexical items?

Let’s put it parallel to L-PERIPH, since it gets passed through the trees in roughly the same way.

OK; this seems to mostly work but I think I need to do something about lexical rules also, for them to propagate the value.

So perhaps the phrase-or-lexrule type should be doing it.

So I now have a situation that seems parallel to what we discussed about head-adjunct and subject extraction, for which @ebender suggested the new list type which I then called clist, for a list of canonical synsems. 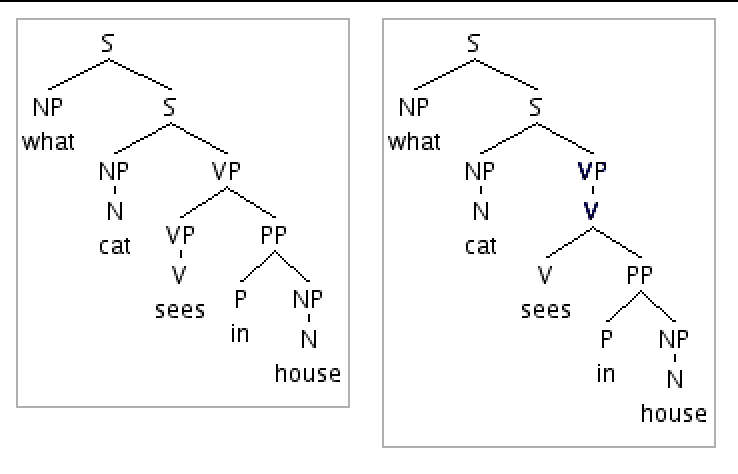 It would be ideal to also rule out this ambiguity in the order of head-adjunct and extracted-complement application.

But adding a [ COMPS clist ] constraint to the head-adjunct’s head daughter leads to ruling out all parses. This is because the basic-head-filler phrase says its arguments’ COMPS are of type olist (maybe; I am actually not clear on why I didn’t hit this with the SUBJ). 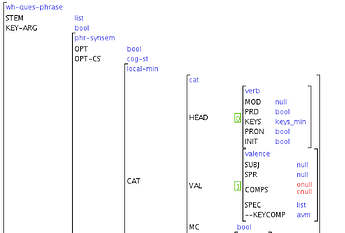 Seems like meddling with that would potentially break argument optionality. And I did not have to meddle with anything like that to fix the SUBJ issue. What do you think, @ebender, do you see right away at what level the olist constraints could be changed? Or can we make clist cross-typed with olist somehow?

I thought you might hit something like this eventually. It can be solved by creating mutual subtypes of onull & cnull, ocons & ccons, and olist & clist.

because ocons’s FIRST is of type unexpressed which cannot be unified with a canonical synsem, looks like.

Does it sound like I need a more elaborate hierarchy of synsem? Or did I not understand “mutual subtypes” right?

Actually, simply omitting this particular subtype seems to work at least for the sentence in the example. So, just creating ocnull := cnull & onull. Will see if that seems to work generally…

Yeah… I think I sense what you mean.

Let’s leave this question open then.

Furthermore, I still have this ambiguity due to head-adjunct being able to serve as the gap daughter: 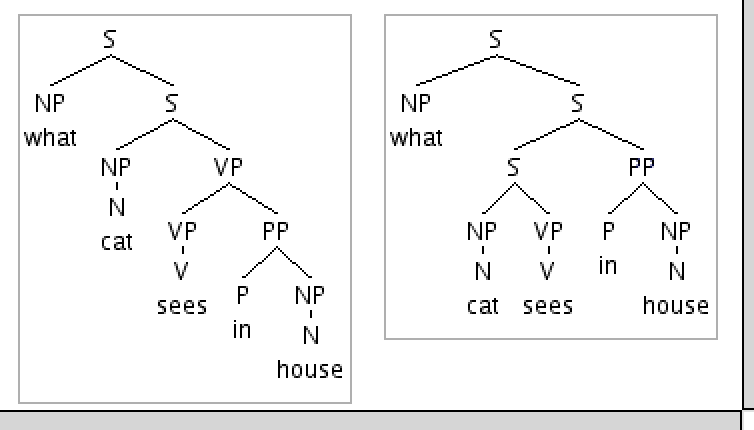 Again, I am assuming semantically this does not make sense? Or does it? I am actually not sure. If it doesn’t, then can something like MODIFIED help me here? I am noticing that, whether this is intended or not, the value on the head daughter in the left tree, the one licensed by the subj-head, is xmod but in the right tree, where the head daughter is head-adj, it is rmod. But I can’t make enough sense of it to see if it is correct and/or applies in any way.

Sorry, what do you mean by “gap daughter”?

Sorry – the head daughter :). As opposed to the “filler” daughter.

That’s nothing other than the usual ambiguity between VP and S attachment of adverbials. Not your problem…

OK, then I suppose for now the only open question is what to do about clist and possibly having a subtype of clist and olist, somehow. Which might require doing something about the hierarchy of synsem, specifically the relationship between canonical-synsem and unexpressed. Could we have something unifiable between them while not breaking what currently relies on olists…

Right – what you’d need is a type that subsumes gap and unexpressed, but not non-gap expressed synsems.