I have a question to @sanghoun (not sure if someone else can answer).

I want to model a (contrastive) focus particle which attaches as a modifier after nouns and verbs: 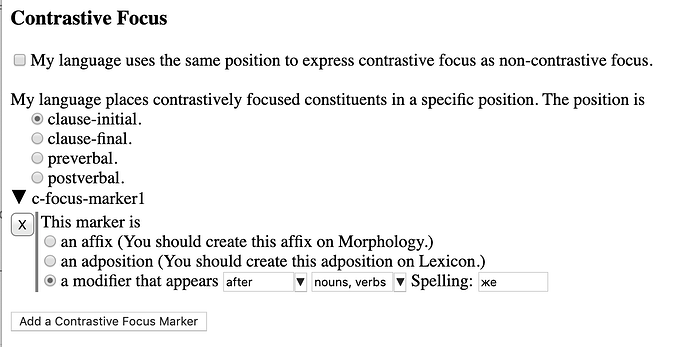 What this is going to do is create a particle which modifies verbs that are [ LIGHT + ] and another that modifies nouns which are [ LIGHT - ]. The verb part is explained in detail in Sanghoun’s book, but I don’t understand the noun part. Why is the second particle constrained to only modify [ LIGHT - ] nouns? Is that to force high attachment with respect to bare NP or is there some other reason?

If it is just an arbitrary decision about the level of attachment wrt the bare NP rule, then I think I’d like to argue for changing it (and add [ LIGHT - ] to the mother of bare-NP rule instead), because I need the particle to require MOD < [LIGHT + ] > for it to attach to wh-words (primarily to test whether question particles play nicely with information structure particles, but also to model question particles off of information structure particles; see here).

All the regression tests pass, with the addition of [ LIGHT - ] to bare NP.

…Except saying bare NP is [ LIGHT - ] does not really make sense. And complicates the analysis of second position clitics.