This is to follow up on the discussion in the EMB students meeting on whether or not a head-compositional version of head-spec is needed to model some possessive strategies. The ERG uses a normal (non-head-compositional) head-spec rule to model possession, and so I am working to see if I can adapt their analysis for my library.

How would this work in the case where the possessive marker is an affix on the possessor? Presumably, you’d have the lexical rule that adds the affix do the same thing that 's does – identify its INDEX with the INDEX of the possessum. As long as the lexical rule also puts the right indices into the poss_rel, it should work fine.

So, that’s where I’m at. I’m not convinced there’s absolutely no way around this, but the head-compositional head-spec rule certainly does the trick.

Thanks for following up … it is indeed tricky. So we’re talking about something like “the dog-s cat” where “-s” is an affix and not a clitic, right?

ordinary spec-head-rule in both cases
[ POSS + ] (or [ CASE poss ] or whatever makes sense in your library)
a non-branching rule that takes the [ POSS + ] NP “the dog-s” and builds a DP that points the INDEX at the right thing in the poss_rel?

To do that last little bit of magic, you’d need a pointer to the right argument in the poss_rel on the [ POSS + ] NP. I see two ways to do this:

(1) The affix-adding lex rule is putting in poss_rel and it links the noun’s XARG to the relevant argument position.
(2) The non-branching DP -> NP rule puts in the poss_rel through its C-CONT and thus has its hands on it anyway.

Does that makes sense?

I think that all makes sense to me, yes. I have tried implementing option #1 and ran into this issue: the NP ‘the dog-s’ is a non-head-compositional head-spec phrase, so its HOOK value comes from the determiner – meaning the XARG of ‘dog-s’ is not accessible to the unary rule. There might be a workaround to that, but I didn’t see one that would work without modifying the lexical type definition for determiners, which I am loath to do. So I am working on implementing option #2 and having issues with diff-lists, but I’ll let you know what happens there.

So, option #2 works (with lots of debugging help from you 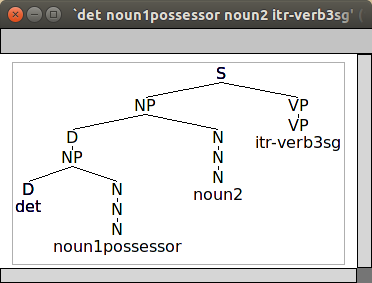 So, it sounds like my claim for the HPSG abstract should instead be “Look how many patterns we can generate using just the phrase types in the matrix.”

As for my library, I’m not sure which approach is actually going to make for a better implementation. Here are the arguments for each version, as I see them:

Settling the implementation is not quite as urgent as getting my analysis settled for the HPSG abstract, so this might be better settled in an actual advisement meeting.

Yes, let’s talk when we next meet in person. I’m glad the HPSG abstract story is clear, though!