I am using a new computer now, and Classic LKB (which I run using VMWare) now displays parses as below: 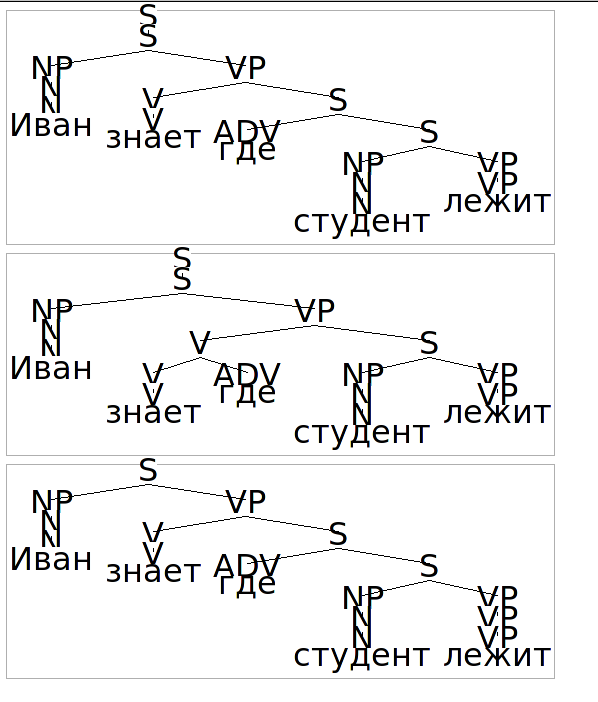 It is the exact same virtual machine I was using on the old computer. Does anyone have any idea which setting could be responsible? It’s gotta be a VM setting of some kind, right? If it was fine before…

This looks like a screenshot of a yzlui window to me - if that’s the case, it’s actually a LUI question not an LKB question so I can only hazard a guess at what’s going on.

Perhaps your new computer has a very different screen resolution to your previous one, and your previous LUI font size settings are no longer appropriate? (Re-)customising your ~/.luirc might help http://moin.delph-in.net/wiki/LuiRc

Do you have any idea about how the settings should be set up? I did not even have a .luirc it turns out. I cannot figure out from the wiki, I am afraid.

I thought a ~/.luirc settings file should work. However I’ve just created one containing a different parse tree font size to normal, but it didn’t have any effect. This is with the latest maclui, so it’s possible that it doesn’t yet read the settings file.

So what helped me eventually was to really restrict the virtual machine as much as possible to smaller resolution. Turn off things like “accelerate 3D graphics”; “use full resolution with retina display”; and then also fix the resolution in the Linux itself to 1360x768.

Now I have the proper alignment of line-edges and letters in the trees :). The “fixed” resolution for the display within the VM tends to “unfix” itself if I move the window, so, that’s not ideal, but it is workable :).

Did you see the http://moin.delph-in.net/wiki/LuiRc page on the wiki? However, I’m not so sure that changing the font sizes in the luirc file will fix the problem you’re having. It might. It looks to me like what is happening is some kind of disagreement in the rendering mechanism between how big the text is expected to be and how big it actually gets drawn. Something realizes that text needs to be drawn twice as big on displays with pixels twice as small, and something doesn’t realize it. My best guess is changing the font size will scale both computations by the same amount, but it might be worth a try – e.g. the tree-node-font and tree-detail-font settings could both be set to a smaller size: