With my wh-tests now passing without lexical threading, I started looking into information structure failures.

In the pseudolanguage I am looking at right now, for example, with lexical threading, in matrix.tdl:

…and then further in customization:

Where there are two NP on top of each other, that’s the narrow-focused-phrase:

The single NP is the bare-NP rule.

Now, without lexical threading, I can get the same 4 trees (and MRS) as follows, by saying that the head daughter’s SUBJ’s LOCAL is the mother’s SLASH:

…and then similarly fixing the customization so it places the constraint on the mother instead of the daughter. This gives me the exact same result as the gold.

However, this does not say anything about any of the other nonlocal features. If I make the rule inherit from the new basic-nonloc-phrase (which appends all nonlocal features of the daughters on the mother), then I lose two of the trees. Specifically, the only two trees which remain are the ones which have the lower NP narrow-focused. The lower bare NP ones are gone. 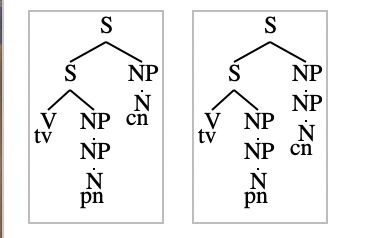 Does anyone understand whether this is a regression or an improvement? @sanghoun, @ebender ?

Assuming this is a regression, why would something like that happen? I of course happily get an interactive unification result, unifying the bare NP from the chart with the non-head daughter of the comp-nmc rule… But that doesn’t surprise me anymore; I think interactive unification may not always work with the new append types (given how often I get the “surprises” recently…)

Specifically in this pseudolanguage, the specification for information structure is:

Narrow focus, according to @sanghoun 's dissertation, is when a single word is in focus (as opposed to the NP argument).

So… perhaps there should in fact only be two parses here, not four, is the focus is clause-final? Unless there are multiple foci but I don’t think that was part of the library?