QUE feature on the verb

…and the VP looks like the verb; QUE looks “healthy” in the sense that the thing on it is identified with something on its ARG-ST but I cannot determine whether it is empty or not.

So the extracted subject phrase is manipulating QUE, perhaps?

It doesn’t look like that to me, although the head-filler phrase insists on a QUE-empty head daugher, I think:

I am confused about how this could ever work, even with only one wh-word, if we expected all the QUEs to be gathered on the verb? I must be misunderstanding something.

Is it that extracted-subj is just failing to constrain the mother’s QUE at all? (If you do View | Grammar Rule for that rule you can check.) This would be compatible with QUE 0-dlist on the head-daughter of head-filler, but probably isn’t right… That is, just leaving it underspecified seems incorrect.

Extracted subject seems to be saying: my QUE is my daughter’s QUE. This comes via head-nexus-que. (Also from looking at the grammar rule in the LKB).

Then repeat that step for the rule licensing the daughter. What does the rule definition for that one say?

(Spoiler: perhaps the Bare-NP rule is to blame)

Here’s the tree by the way:

So we have just examined the second (lower) S, licensed by the Subject-Extraction rule. Next in line is the Head-Complement rule.

That one is saying: the mother’s QUE is the head daughter’s QUE.

As for the complement, the bare NP rule does look like it is underspecifying the QUE: 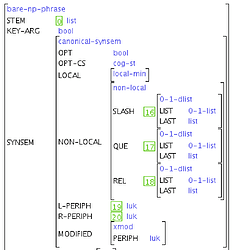 (I am not sure why it is so because it is inheriting from head-valence-phrase which is a subtype of head-nexus-phrase, which should take care of the QUE…)

Can we back up at review the top-level question here? What are you trying to discover and why?

I want to make sure that I get correct grammars (from the Matrix), specifically that the QUE feature is what I should expect, including on the verb.

Hi Olga – in talking with @sweaglesw yesterday I remembered a critical piece of what’s going on here: The whole point of the LOCAL/NON-LOCAL feature distinction. The QUE value of the extracted wh word is not amalgamated into the QUE value of the verb, because the verb only sees its LOCAL features. Take a look at the type gap — the thing that ends up on the verb’s ARG-ST if an argument-extraction rule applies. It should have a non-empty SLASH value, identified with its own LOCAL value, but empty QUE and REL.

the verb only sees its LOCAL features.

But what is happening with it (the verb) inheriting from basic-two-arg then? That is bypassed somehow, or ignored, or what is going on?

The verb is amalgamating the SLASH, REL, and QUE of the two elements on its ARG-ST. The first of these, having been extracted, is of type gap:

I read Bouma et al. today and they do give an account of how gap-synsem participates in licensing subject, complement, and adjunct extraction (also under the Argument Structure Extension and Argument Realization Principle). However they do not focus on LOCAL vs. NON-LOCAL distinction, at least not overtly (perhaps there is something implicit).

Are we talking about the Locality principle here perhaps? A verb should not see any non-local features of its arguments because there is little linguistic motivation for it?

No, I don’t think it’s the locality principle. I think it’s specifically for the mechanics of the analysis of long-distance dependencies. I don’t have P&S to hand just now, but perhaps that’s where NON-LOCAL v LOCAL is introduced?

P&S use the “trace” lexical item (which is similar to gap-synsem in that it identifies its LOCAL with the SLASH) and the Nonlocal Feature Principle which means the mother’s NON-LOCAL is the union of its daughters’ NON-LOCALs. This is as far as the analysis of long-distance dependencies goes. As for where NON-LOCAL is introduced: it is in chapter 1 but it simply says that the discussion of nonlocal features is postponed till chapter 4 (the long-distance dependencies chapter). The answer might be somewhere there but I am afraid it may be implicit… Perhaps somewhere in the ungrammatical examples which their analysis rules out because of how they are treating LOCAL vs. NONLOCAL… But I can’t find anything explicit so far.

The only other thing I can find is they say that their nonlocal features are similar to GPSG. Should I look there?..

(My goal here is to understand the theory behind the Grammar Matrix’s usage of QUE; which makes me think perhaps I should be looking in Flickinger somewhere.)

Update: Ginzburg and Sag (2001) have a “WH-amalgamation constraint” similar to SLASH-amalgamation, stating that a word’s WH is the union of its ARG-ST element’s WHs. (WH there corresponds to QUE). So a noun will have its specifier’s WH, for example. Then for verbs, they say that “subject-selecting verbs must be WH-empty”, but that is because they have something called WH-Subject Prohibition: a word’s SUBJ must be WH-empty. This is so that sentences like Who left are licensed by the HFR and not the HSR. They have yet an additional WH-Constraint stating that “any non-initial element of a lexeme’s ARG-ST must be WH-empty”. It is a bit confusing to me; the section on verbs is disappointingly short and focuses entirely on special cases, not really explicating how the basic cases are supposed to work. Maybe I will find that in an earlier section (though I already have read them!)

What to do with QUE (and YNQ) in wh-question filler-gap phrase
Disallowing in-situ questions as embedded clauses
ebender November 12, 2019, 8:12pm #47

Interesting! So: they’re using it to prevent spurious ambiguity in sentences like “Who left?”. Because the wh word’s NON-LOCAL features are not accessible to the verb (because it can see only the LOCAL when its SLASH is identified with the filler in the HFR), then a constraint that says that “subject-selecting verbs must be WH-empty” would indeed have the effect of forcing the HFR analysis for these sentences.

But this makes me wonder: (1) What do they mean by “subject-selecting verbs”? Do they not have (most) verbs selecting for subjects in the lexicon? (2) What do they do with the WH values of in situ non-subject WH words?

(1) This is what confuses me. I will look for an answer though I suspect they just mean all (most) verbs… Maybe as opposed to infinitives or something like that?..
(2) Their wh-words are optionally WH-specified. You can have a what which is WH-empty as well as one which is WH-nonemtpy.

(1) It would be quite like Ivan to have some constraint that kicks in just in case the verb is directly combining with its subject.
(2) Make sense.

So, in a sentence like Who saw what?, in the ERG/Matrix context, we concluded we expect to see what’s QUE value on the verb and on the VP.

What should happen to it eventually? There is no complement extraction; should the QUE value just stay there, including in the final S?

In the ERG, it disappears at the HFR level, so, at the top S. But what mechanism is in place here, theoretically?