I realized my wh-determiner (for the GM library for wh-question) is not quite done yet because it isn’t doing about QUE. So, an NPs like which book looks just like a regular NP and the reason the whole thing gets a parse at the end is due to simple Head-Complement rule.

So, I am working on that, and seem to be stuck.

Here’s what I did:

(I am not sure that’s the right thing to associate QUE with though, but that was my best guess).

The Head-Spec rule doesn’t seem to be copying up non-local features, so, I added this:

But this does not seem to have the effect that I want. When I parse and examine the determiner, I see that it’s SPEC’s QUE is nonempty: 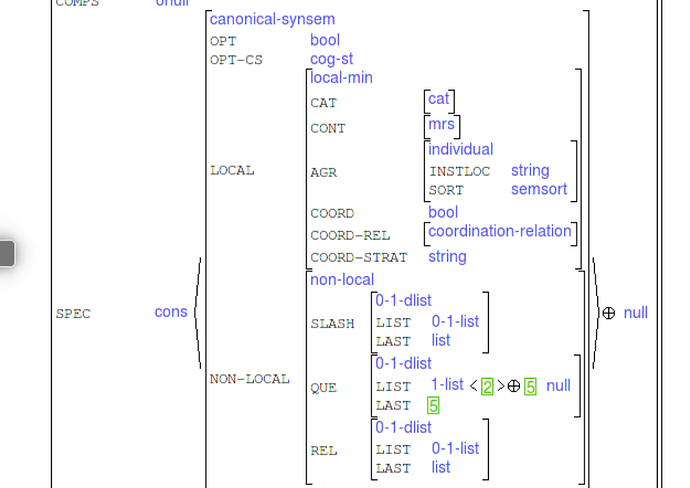 However it is empty on the parent NP: 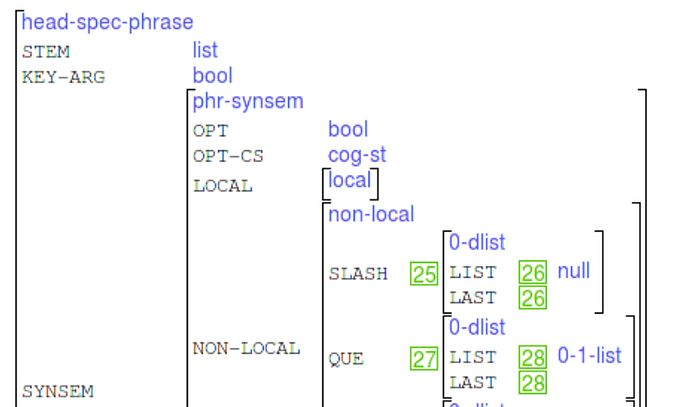 Which should be inherited by head-spec so adding that constraint about non-local shouldn’t have an effect. I wonder if the noun isn’t inheriting from basic-one-arg?

I don’t think the head-spec rule does anything with SPEC’s NON-LOCAL, so any constraints you put there won’t have any effect.

But even if the head-spec rule unifies NON-LOCAL, I think that will cause problems because the constraint that adds something to the SPEC’s QUE will conflict with the noun’s QUE (which should be empty). I think you should be adding to the determiner’s own QUE, not its SPEC’s QUE – I just checked and the ERG uses the determiner’s QUE (in the type d_-_prt-unsp_le).