Representing semantic holes in a TFS

Related to this topic, I am working on composing larger MRSs with smaller MRS fragments.

I am trying to use the notion of a SEMENT per the MRS algebra paper.

However, I am running into some issues with how I would represent the holes of a lexical item in a consistent, general way in a typed feature structure.

Per the paper, a SEMENT is defined as follows: 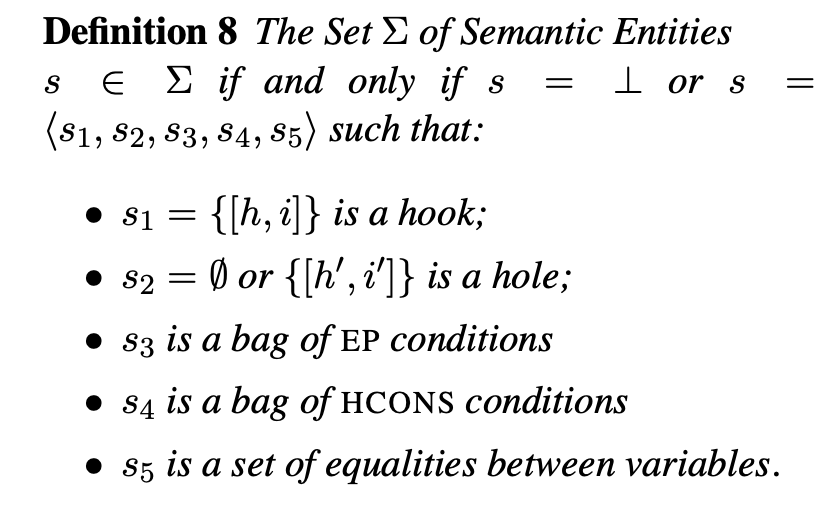 The paper then provides an example of intersective modification for “white dog”: 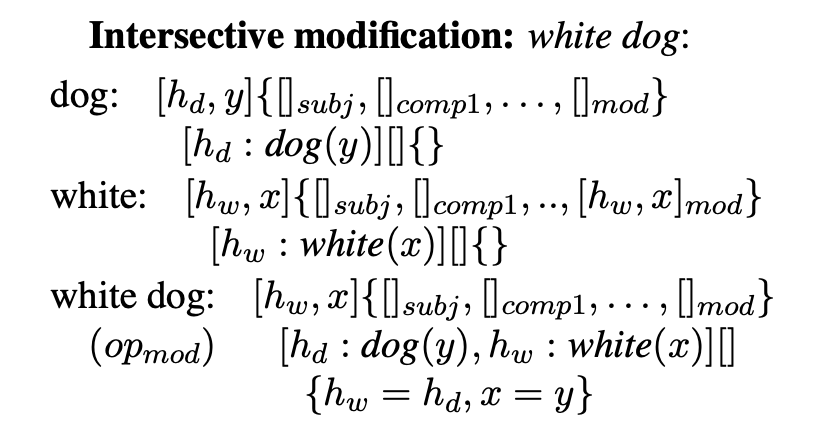 Firstly, it seems to me that the SEMENT for white isn’t exactly compatible with the way adjectives are represented in the ERG. I feel like a more accurate SEMENT would be:

That is, the hook contains a handle and a variable of type e rather than x. Additionally, the EP should have both the intrinsic event variable that is in the hook in addition to the x type variable that is to be modified by this adjective. Correct me if I am wrong, though.

Given this, I tried to mock up a TFS that would include all the usual things an MRS has plus the HOLES and EQs: 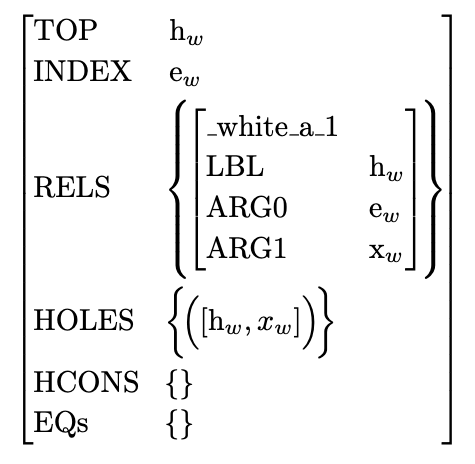 The trouble I am having is that I really don’t know how to expose the holes in a way that seems like it would work. For this example, I suppose it’s possible to just create an intersective modification rule that would say “identify the handle and index of the modified thing with the handle and variable in the hole of the modifier.”

However, if there is more than one hole it seems to fall apart. Such as with a verb like _give_v_1: 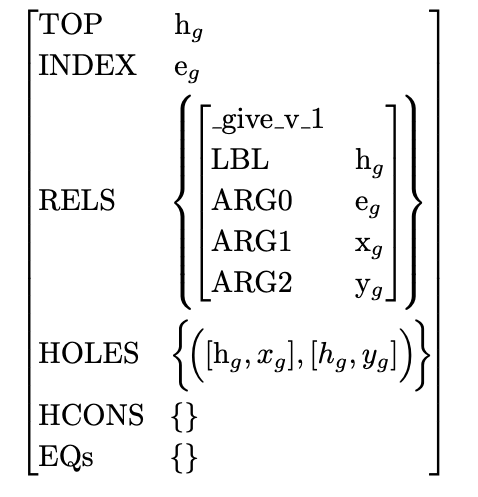 When adding complements, I would need to be able to tell which of these holes goes with ARG1 and which with ARG2 in order to do it correctly, but this representation doesn’t expose that. (Also, I’m not sure if the handle of the verb is supposed to be identified with the handles of its complements, but for now I just put that).

I suppose it’s possible that it could be the case that the HOLES list is ordered, just like a COMPS list, so that I do know which hole I’m filling just based on the order of them. Would that work?

UPDATE: It seems like that actually wouldn’t work because once I fill in one of the holes it would no longer be in the list of holes in the composed MRS. So maybe at first I would know the “first hole” belongs to ARG1 but then at the next level the “first hole” is now ARG2. So I would need to be very careful about composing things in a certain way and just hoping it all works out which seems ill advised.

UPDATE 2: I also want to note that in the paper itself it seems like every hole is just labeled as what it is (subj, comp1, etc.) which might be what I need to do, but even doing that I think I would have to specify I think that it’s an ARG1 hole for a particular EP in the case of an MRS with many EPs with ARG1 holes.

Your UPDATE 2 is correct: holes should be labelled, and there can only be one hole per label. (The paper uses SUBJ, COMP1, etc., rather than ARG1, ARG2.)

For semantic composition in a grammar, this is sufficient (there is no need for multiple holes with the same label). For creating your own MRSs, you don’t necessarily need to follow the semantic algebra – you just need to make sure that the resulting MRS can be generated by the grammar.