Spurious ambiguity with free word order (and support of ditransitives)

I currently have some unwanted ambiguity in my Russian grammar, I thought I’d document it here. This way I not only have structured notes for any future writing but also might get input from people.

I have currently the following sort of overgeneration, this is for sentence (1): 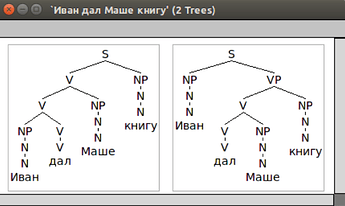 But it doesn’t look like I could constrain the head-2nd-comp rules to be SUBJ < [ ] >, because then I will lose what’s currently my only way of licensing (2): 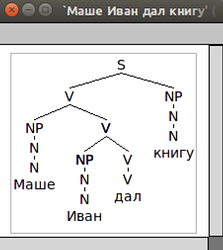 Any ideas on how to deal with the ambiguity while still keeping the coverage? Or do people think that orders which are potentially somewhat marked should rightfully be excluded? Except, even if I model information structure, in which case such orders should probably be included, I will still have this problem.

First, I would call this spurious ambiguity, not overgeneration, since it’s not an issue (at least not obviously so) of ungrammatical strings being licensed.

I think the place to look is in Antske’s writing about the free word order library: http://moin.delph-in.net/MatrixDoc/WordOrder

… that should explain how she’s using MODIFIED to constrain attachment order, and you can check if something analogous will work here.

Agreed; corrected “overgeneration” to “ambiguity” above.

Will look at Antske’s work! Thanks.

So, the solution here is to go back to the original analysis provided by the GM where head-2nd-complement rules inherit from head-nexus rules, which have the ATTACH constraints :). I removed that for a separate reason, but it should go back in of course.