Related to this but may be separate.

I think I am maybe seeing one of those “unification surprises” where you don’t see an edge in the chart but aren’t getting any unification failures interactively.

Here’s what I expect (the verb): 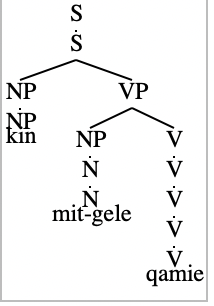 I am no longer getting this with the updated customization system/grammar, and specifically what I am not getting is the non-future—interrogative-transitive part.

I am seeing the interrogative-IN-transitive rule in the chart but not the transitive rule. Yet when I am interactively unifying, everything seems fine.

It is a const-lex-rule, and the difference between the working version and the broken version is that the broken version inherits additionally from something called add-icons-subj-foc-lex-rule, which is something new, being added by the information structure library. The intransitive version is not inheriting from it, and if I remove it and replace it with add-only-no-rels-hcons-rule, then I do get the parse.

The new information structure rule which seems to be breaking things looks like this:

Why would the combination of all that result in the transitive rule not showing up in the chart?

(By the way, if I get rid of those new information structure rules, the test just passes… Given that those new rules were just experimental and only covered two of the corresponding information structure tests, I am half-mind just skipping those two tests and getting rid of them. But, would still be good to understand what is going on, and maybe it is an easy fix.)