I am adding non-scopal adverbs and (non-case-marking an non-info-structure) adpositions to the GM – to support wh-questions, but I was thinking of actually adding support for simple declarative sentences involving them, too (simply because I have them in my development grammar and some simple support shouldn’t be hard to add).

For my Russian development grammar, I ended up needing the following kind of head-adjunct phrase:

As for the nonlocal constraints, this is what I need for my test suite so far; I am not yet sure whether more will be needed.

Right now I have a question about the VAL constraints. I seem to be needing them because without them I get lots of trees. I realize adpositions and adverbs can attach on different levels but the structure I am considering right now is when they attach to S. I cannot use the (relatively new) cat-sat type because the NON-HEAD-DTR has a non-empty MOD. Should I then do the following (on the matrix core level):

Yes, that’s a fine type to create, but you don’t want to put it on the head-daughter of the rule and probably not on the non-head daughter either. For the head daughter, this can be a constraint on the MOD value of the modifier — so they can specify if they want to attach to V, VP or S (or ambiguously any of those) and the same rule can work for modifiers of different values. Also, to get the LBL sharing right in non-scopal modifiers of nominal projections, the modifier needs to attach to the SPR non-empty constituent.

For the non-head (i.e. modifier) daughter, you probably just want COMPS < >. The SPR value on modifiers is used for degree specifiers (like very in very sleepy), but that doesn’t have to be saturated. Similarly, adps might take subjects in a copulaless language but can function as modifiers without them (maybe only without them).

Actually, I think I have been misunderstanding the meaning of cat-sat (and of the list hierarchy, yet again).

cat-sat means things like SPR and COMPS are olist which for some reason I thought meant empty list. But it doesn’t does it?

If I specify the preposition’s complement as cat-sat, that does not help me get rid of the tree on the left, for example (this is Ivan is lying in the book again): 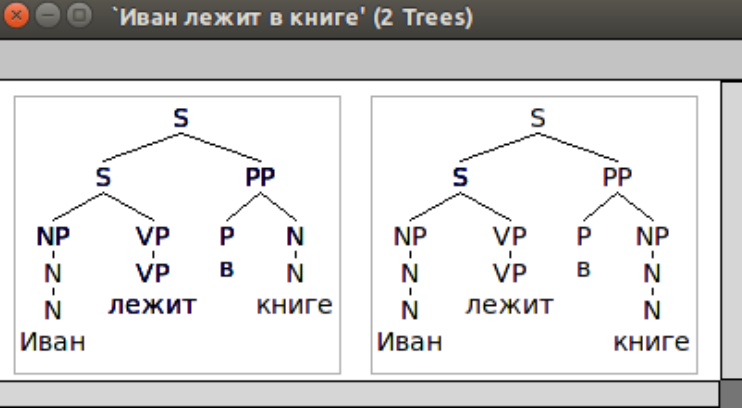 So, this does not help with the first tree:

Indeed! olist means that the list might be non-empty, but if it is non-empty, then every element on it is [ OPT + ]. I’m actually not sure off the top of my head what cat-sat was created for, but you’re right that it won’t do what you want here. Your solution (SPR < > on the complement) is what I would do.

What does the type cat-sat mean?