Complementizers in the Matrix are currently raise-sem-lex-item which means they copy their complement’s HOOK.

I am currently working on embedded questions and on modeling the differences in the behavior of verbs like think vs. know:

So far things work out with complementizers simply copying their complement’s SF up.

However, in order to model:

(7) Who do you think that arrived?

It appears that I need a semantically “active” that which doesn’t care what the SF value of its complement is but rather says: I take any complement but I myself introduce propositional semantics to the clause.

Is my reasoning correct? If so, I will proceed with what kind of problem I am having with copying up everything but the SF value in some cases. If not, how should I better reason about this? Am I at least right that (7) is grammatical?

In the ERG, it looks like it is analyzed as some sort of relativized construction… (Who is the person about which you think that they arrived, some reading like that perhaps?) 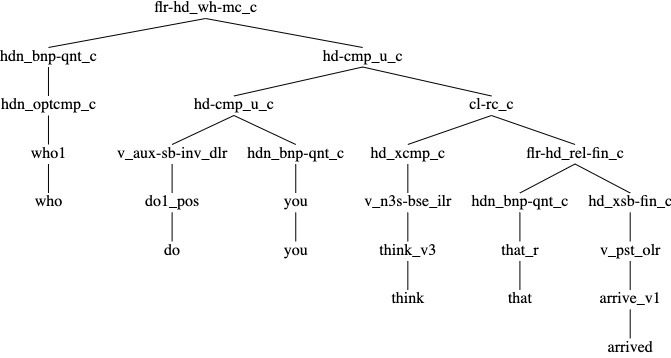 ICONS identities and copying HOOK in parts without identifying it as a whole
guyemerson May 8, 2020, 11:34am #2

(7) Who do you think that arrived?

It appears that I need a semantically “active” that which doesn’t care what the SF value of its complement is but rather says: I take any complement but I myself introduce propositional semantics to the clause.

(7) is questionable English (the ERG parses (7) but not with the parse you want), but I take the example to be: the matrix clause is SF ques and the embedded clause is SF prop with a gap. There is an unbounded dependency for the wh-word, but presumably the same “that” can be used for (7) and (1).

But perhaps the more important point: the hook cares about the actual individuals, and not just their features. (i.e. it cares about token identity, not just type identity). So “copying up everything but the SF value” doesn’t make sense (because we’re constructing semantics monotonically).

the hook cares about the actual individuals, and not just their features. (i.e. it cares about token identity, not just type identity). So “copying up everything but the SF value” doesn’t make sense (because we’re constructing semantics monotonically).

Agreed on Guy’s interpretation of the (yes, questionable) (7): the embedded clause is [SF prop]. Keep in mind that part of what’s wild about wh words is that they have two semantic ‘homes’ in the sentence: where they fit in as part of the predicate-argument structure (who contributes the _person_n which is the ARG1 of _arrive_v) and which clause they are a question parameter for (in (7), that’s the matrix clause: “Who is the person such that you think they arrived?”).

Note also that the reason (7) is questionable in English has to do with the so-called that-trace effect (subject gaps are bad right after the that complementizer) and not with the semantics. Who do you think arrived? is perfectly ordinary.

What would be some definition of what it means to embed a proposition vs. question? Particularly for predicates about which we say that they can do both.

means I think I know a fact, and the fact would be that Kim arrived.

means I know a fact for sure, and the fact is that Kim arrived.

). Anyway, if this is so, then does know actually embed a question?

(4) I wonder who arrived

means I am asking a question and that question is who arrived?

think embeds propositions. know embeds either propositions or questions, but when it embeds a question, semantically it is “doing something” with the answer to the question. wonder embeds questions.

I was looking for a rephrasing of “embed propositions/questions”; your clarification about know helps a little!

Here’s what I am very confused about right now. It is fairly clear that think, know, and wonder differ in the following way:

But it is much less clear to me what happens with wh-fronting, and what the role of the complementizer is.

Is clearly possible. (Let’s leave the possibility of the complementizer alone for now.)

In order for it to be possible, the LDD between the argument of think and who must be a local one, that’s fine, that’s how we’ve been modeling it.

Now, Who do you ask arrived sounds to me as good as (7); do native speakers agree? And, following the previous logic, both the embedded and the main clause here would be SF ques?

actually sounds really bad to me, in English and in Russian. Does it sound worse to native speakers in English? If yes, so you have any idea why? And doesn’t (9) in fact sound better?

I become very confused about the differences between the three verbs once I start looking at fronted examples. Could it be that the fronted example with know sounds worse because it is ambiguous this way, between whether the embedded clause is SF prop or ques? And the complementizer makes it better?

Who do you ask arrived? is bad. What meaning are you intending?

(8) is fine. Paraphrasing, it means: “You know that a person arrived. Who is that person?”

(9) is bad. I think it’s okay with a resumptive “they” but a lot of English speakers don’t like resumptive pronouns.

The complementiser is a distraction in terms of the difference between prop and ques – “that” has syntactic restrictions (e.g. the that-trace effect Emily pointed out, which is why (9) is bad), but prop and ques are semantic.

Wonder ques: wonder about the answer to the question.

If the matrix clause is ques, start with the semantics for the version which is prop. Then make it a question.

Who do you ask arrived? is bad. What meaning are you intending?

Who is that person about which you asked whether they arrived? Something like that.

So, you are saying, in English at least, ask-verbs do not allow SLASH-ed complements which are filled by wh-words in the front? And know will allow them in the same way as think will, the embedded clause will be SF-prop only, never SF-ques?

If the matrix clause is ques , start with the semantics for the version which is prop . Then make it a question.

not sure what this means? Thanks, Guy :).

But generally, they mostly use wonder in their examples, and I could not find any discussion on any possible contrasts in extraction from clauses embedded by think, know, and wonder.

They have, as mostly unacceptable:

…but there is an extra who here, anyway…

Most papers I find about think vs. know vs. ask/wonder do not talk about LDDs :/. And I myself seem both unable to have clear judgments (in Russian as well) and to construct a clear pattern for the LDD sentences which would directly follow from the three-way think, know, and ask distinction.

If the matrix clause is ques, start with the semantics for the version which is prop. Then make it a question.

not sure what this means? Thanks, Guy :).

For English speakers who allow resumptive pronouns, we could ask: “who do you ask me whether they arrived?”, meaning: you ask me to find out whether some person arrived, but who is that person?

So, you are saying, in English at least, ask -verbs do not allow SLASH-ed complements which are filled by wh-words in the front? And know will allow them in the same way as think will, the embedded clause will be SF-prop only, never SF-ques?

English is restrictive about extraction from an embedded question. “think” and “say” only embed propositions. (10) is embedding a proposition. (But “think about” can embed questions.)

(11) sounds bad to me. (I don’t have access to Ginzburg and Sag right now, but I would guess they’re trying to form a question where both clauses are wh-questions, and both gaps are in the embedded clause.)

It sounds like you’re asking for judgements on sentences like the following (feel free to ignore all of the % sentences if you don’t want to think about resumptive pronouns; I think Dan would * them all, and my intuitions on these are a little murky anyway):

“know” can be substituted into all of the above without changing my grammaticality judgements (for the intended readings).

(As a reminder, echo questions are a separate phenomenon, and would be a distraction here.)

I’m not all caught up on the thread, but I just need to throw out some more native speaker judgements that differ from @guyemerson‘s (maybe dialectal differences?)

I agree with @olzama’s judgements on 1-6.

7 is great and common.

7a (“Who do you ask arrived”) is definitely bad. I’m trying to figure out a paraphrase that is better, but struggling. Maybe “who are you asking whether they arrived,” but that’s weird too.

8 is great. Unlike @guyemerson, my wife and I both think 9 is great, too, or even more natural than 8. One comment about 9 is that “for sure” sounds better before “arrived”, but can also go where you have it. I suppose before “arrived” has different semantics.

For (8) and (9), there is an ambiguity to be aware of, because “know” can also be transitive and “that” can introduce a relative clause (of the people that arrived, who are you acquainted with?). (Also, moving “for sure” after “that” strengthens this other reading, for me at least.)

So for the intended reading with a complement clause, “think” is clearer:

T.J., I concur that (9) is fine as an extraposed relative clause, meaning: “Out of the people that you know, which ones arrived?”

I don’t think that’s the meaning Olga intended. I think the intent was “Who is the person such that you know that they arrived?”

The meaning difference is perhaps a little bit vague, but the point is that in the non-controversial reading, “people” is the ARG2 of an NP-transitive “know,” whereas in the intended but unavailable reading, “know” is clause-transitive with a gapped complement.

So it sounds like it would make sense to have a check box in the clausal complements library, saying “verbs participating in this strategy allow (wh-) LDDs with their arguments”. Or should this even be in the verbal lexicon? And this would probably just be in addition to what I already have on the Constituent Questions page where I have fronting: obligatory/optional, single/multiple, and pied piping: optional choices. These choices control which phrase structure rules are added and how they are constrained, but in addition to that, it should be possible to block something like ask from taking SLASH-ed clausal complements.

None of this of course solves the I ask Kim arrived problem.

Thanks @guyemerson and @sweaglesw. Feel free to ignore this message as my understanding of this is not very high priority for anyone :-p

However, I’m still trying to wrap my head around this. I think I just said these four sentences (8, 9, 8’, and 9’) aloud to myself too many times, so I don’t trust my grammaticality judgements. However, I also think I’m good with resumptives, which may be contributing?

Just to confirm my understand, this is where we are:

Where these should paraphrase to: “Who is the person such that you (think|know) they arrived”

I want to say that these are grammatical in conversation, but I think my broca’s area is revolting. I will sleep on them.

I was trying to work this out and found that maybe thinking about the echo questions (but not handling them) helped me understand. Is this the distinction at hand?

They’re paraphrases in a situation where the people you’re acquainted with are the same people whose arrival you have knowledge of.