In-situ wh-words in languages which also do extraction

After I added in-situ (QUE-empty) wh-words to my Russian grammar which simply go through regular head-subject and head-complement (rather than head-filler) rules, I have two new problems:

(1) no question semantics for the phrases built with such words;
(2) sentences like Who sleeps? get two parses, one using the extracted wh-word and a filler-head rule, and another using an in-situ word and the subj-head rule.

Does it sound like I need a new nonlocal feature, similar to QUE? Perhaps QUE can keep indicating that something needs to be extracted, while the new feature would indicate that something is a question but not an extracted one?

I also think that, unless we decide, somehow, that we do not want question-only semantics for in-situ words, then I need more subtypes of interrogative-clause, specifically for the in-situ phrases.

Does it sound like I am on the right track?

Apart from a separate feature which I currently assume I need for proper question semantics in in-situ questions, this would all also be in line with Ginzburg&Sag (2001). It is hard for me to compare our approach to semantics to theirs but I think their analysis works because there, some semantic things are being retrieved or kept in the ``quantifier storage’’, and I don’t understand at this point what makes them either be retrieved or stay in the storage, but that I think is how they avoid ambiguity with in-situ wh-phrases. Regular head-subject and head-complement rules are used up until the very top, but then the sentence cannot become root because there is something yet in the quantifier storage which still has to be retrieved. The in-situ-interrogative-clause rule does that, and then we have a sentence. Something like that.

We don’t have a quantifier store, so it sounds like we’d be using some additional SLASH-like mechanism here, except we wouldn’t be using it in head-filler rules but would have an unary rule which adds question semantics to something that has a non-empty list of this kind and makes the list empty, after which the sentence can fire?

Just quickly before a meeting – is there anything useful about wh in situ and question semantics here? If so, can you see why it wouldn’t work in the present case?

There, you use the same lexical entries for in-situ wh-words as for extraction (QUE-nonempty). Then there is a unary rule which assumes subject-head as input and which empties the QUE. I am assuming root is QUE-empty in this case.

Yeah, perhaps just using QUE this way could work and maybe there was no reason in going the G&S route with QUE-empty words… Or maybe I am forgetting something. I will try.

Sure, this was just a poor phrasing on my part. What I meant to say I guess is that the example in the lab instructions concerns head-subj constructions as daughters for the rule…

So, generally this works and I have the same coverage and overgeneration as with the G&S-inspired solution, and I now of course have proper question semantics for in-situ questions (hooray!).

This I think boils down to the analysis of the obligatoriness of fronting. If fronting is indeed obligatory (= something like sleeps who isn’t possible), then in-situ should not fire for questions like who sleeps but perhaps I will be able to constrain at least some of the phrase structure rules to be QUE-empty. If however sleeps who is possible, then perhaps that is an indication that extraction is not necessary in such a language?

Yes, it seems like it would be hard to avoid the ambiguity for who sleeps. Dan is avoiding it somehow, even though he allows wh in situ at least for objects. Maybe worth looking at what the ERG does?

Would an example be something like Kim did what?

Something like Kim did what? would be licensed in the ERG bu the means of the following rule:

I am not yet sure but I suspect that the ERG analysis might hinge on the fact that in English, the in situ objects are always to the right of the verb? If that’s the case, then it won’t help with Russian sentences like Ivan where goes?

It seems like a lot of this is about whether fronting has something special about it (it probably does) and whether sentences like What Ivan does? are “better” in Russian than Ivan what does (there probably is a difference in how they sound).

The ERG has the subjh rule cross-classified with various clausal types, I think, because subjects always attach last. That doesn’t generalize. I see from that tdl that that rule could never be used for subject wh words, so that answers how Dan avoids the ambiguity. And you’re right, that analysis won’t work in your case.

I think it’s fine for now to just have the ambiguity.

Is the following ambiguity for (1) of exactly the same sort? Or could we do something here and I am not seeing it… 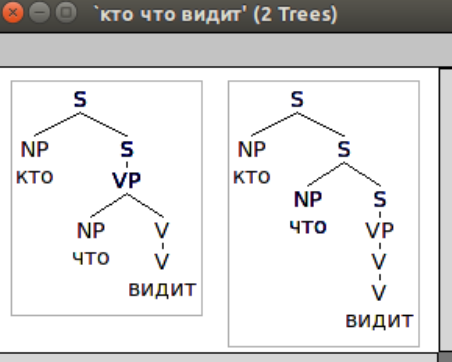 On the left, the VP is formed by the comp-head rule (which needs to allow QUE-nonempty non-head-daughters in order to license Ivan what sees?). On the right, the VP is the product of complement extraction. Then subject extraction applies, in both cases, then filler-head can ultimately apply.

If I say that comp-head cannot have QUE-nonempty daughters, I lose Ivan what does?. Is there anything I can say about subject extraction to get rid of the second tree?..

Warning: below might be something crazy, but I want to write it down still. It’s probably a really wrong path, in which case we can go back to discussing what’s above.

For example, I could say subject extraction only applies to non-slashed VPs, but then for Russian, I will have to remove the SUBJ < > constraint from the head daughter of the filler-head rule.

Then… Something interesting happens, actually. If I also allow subject-head rules to append QUE (this is likely the crazy part), then I get a situation where in Who what sees?, for example, in Russian, the VP will be licensed by the filler-head rule and the S by subj-head and then the top S by the unary “in-situ” question.

Which looks weird but… the semantics is ok and it helps with the ambiguity, so?..

Of course this breaks just about everything else, like the normal application of head-subj to declarative sentences, it just doesn’t apply though I can’t see any unification failure; probably has to do with removing the head-valence parent from head-subj rules, although I did put in the SLASH propagation in the types directly. So, either this is completely crazy (probably) or perhaps the reason for declarative sentences not parsing could easily be addressed?..

I would be okay saying this is ambiguity we have to live with (at least for now). But the nice thing about version control + test suites is that you can explore the crazy ideas and see if they can work out

I am wondering whether it was such a good idea to do multiple fronting for Russian in the first place. Now that we have the in-situ treatment in place, why not say that only one thing can ever be extracted.

Besides getting rid of most of the ambiguity, that will probably help:

(1) ruling out VSO order for wh-questions, if that’s the goal (which I am not sure it is for Russian but it can be for other languages);
(2) help with languages with no pied-piping (Russian), i.e. extract determiners and generally do long-distance dependencies.

What do you think, @ebender? Isn’t this better? People usually insist that there is “multiple fronting” but honestly, it just isn’t clear to me what that means if (a) the word order is free and b) the fronting isn’t in fact obligatory…

The key question is whether you can get things like: who what did Ivan say saw?

Hmm… Interestingly I really don’t like Who what did Ivan say saw? however Who which books did Ivan say read? seems much better…

So, looks like mutiple extraction after all, I guess.

And the ambiguity may be indicative of information structural differences…

And it wouldn’t do any sense at all to only use multiple fronting in complex clauses?.. is it even possible, formally?

Not sure how to do that formally…

And this situation is parallel to the situation with head-adjunct rules, correct?

So, to allow something like (in a pseudolanguage): Ivan where goes?, we must say adj-head allows QUE-nonempty nonhead daughters, and so we end up with two trees for Where Ivan goes, one via extraction and one via in-situ?

I wish I could somehow prohibit the in-situ-clause to take daughters who have a left-peripheral QUE-nonemtpy thing… Is there a way to look at what is left-peripheral in a phrase?.. (Sounds hacky but still thought I’d ask).

…also with Head-Adjunct rules, if we allow head-adjunct-phrase to have slashed head daughters to license something like who goes where?, then we will have two trees for it, with the head-adjunct-phrase attaching both before and after subject-extraction-rule.

I could say that the head-adjunct rules require the head daughter be SUBJ cons, and I think this will probably work for strict S-V orders?

So you definitely don’t want head-adj to require SUBJ cons, since that prevents S-level attachment of adjuncts.

But the idea of constraining the in situ (S over S) rule to cases where the daughter doesn’t have something in the left periphery seems maybe like a good way to go. You could add a feature inside L-PERIPH which reflects the QUE value of the left edge, perhaps. Where I think this would break down, though, is in VSO sentences where the verb’s QUE value is going to reflect the append of its dependents QUE values. But maybe that could be special-cased in some way.