I’ve overhauled the wh-questions and the clausal complements libraries to finally account for the fact that different verbs behave differently wrt embedding questions.

In particular, I am assuming that:

This works pretty well in terms of getting good coverage with an overall clearer picture about ambiguity. Each verb has an opinion about its complement’s SF value.

The question I have right now is what to do with complementizers.

The clausal complements library associates each strategy with its own set of complementizers. I think this is probably not going to work well in the context of using two separate clausal complementation strategies for think and know because surely they both use the same complementizer that. Creating two that-s is going to create ambiguity – unless I introduce some artificial FORM values on them, which of course isn’t that hard. 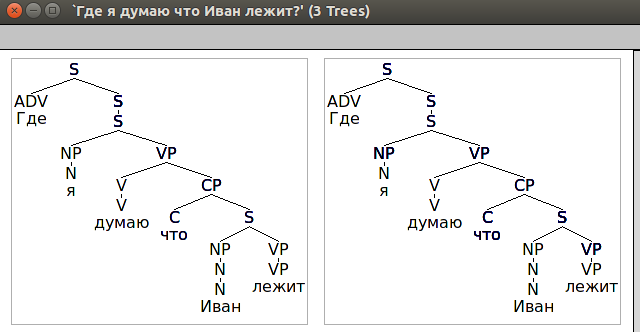 In English at least, the complementizers are specific about which type of clause they combine with (prop in the case of that, ques in the case of whether and if). Same is true in Japanese and French, if my L2 knowledge is to be trusted. So, this is only going to be a problem if you have a complementation strategy that is compatible with both prop and ques AND with some verbs that only combine with one or the other. Do you have evidence of this?

Cannot know in English combine with both whether and that? While think only with that?

The ERG accepts I think whether Kim arrived btw. It doesn’t sound good, does it? Furthermore, in whether Kim arrived, the event should have SF ques, right? It has SF prop in the ERG. So, perhaps the ERG has a similar problem to the one I had before, with not enough distinction between how various clause-embedding verbs behave in terms of embedding interrogative vs. propositional semantics.

Cannot know in English combine with both whether and that ? While think only with that ?

Correct – know can take with prop or ques complements, think only prop. whether enforces [SF ques] and that [SF prop].

Correct – know can take with prop or ques complements, think only prop. whether enforces [SF ques] and that [SF prop].

Right, so, the question is, how do I avoid the situation that I have in the original post, if I have both think and know, as different types of verbs, but both taking propositional complements and both (therefore) compatible with that? And the clausal complements library requiring that each complementation strategy comes with its own set of complementizers? This last bit is probably what’s problematic; I remember that it was motivated by Uzbek but perhaps Uzbek could be reanalyzed somehow; hard to say just now.

…Does it sound, then, like think and know belong to the same complementation strategy, and the business of distinguishing between the semantics of clauses which they can embed is pushed to the Lexicon? (Not sure at this point what would happen to the complementizers which now belong to the clausal complements library.)

that and whether would have to correspond to different complementation strategies. think is compatible with only the former, know with both.

Yes. So, given the current structure of clausal complements library, I have two that-s! Know will require both that and whether, entered once, and then think will require another that. Perhaps looking at the library will help?

I’m confused as to why you want two thats. Regardless of how flexible the verb that combines with it is, that always insists on [ SF comp ]. I think you might need, given the current library, two knows.

I think you might need, given the current library, two know s.

Oh that’s right! And I even said so myself before but then got confused with the complementizers.

OK. With two know-s and optional complementizers, is there any way to avoid the following ambiguity for I know, Ivan is lying (as in “resting”, not that it matters but I don’t want my Ivan to be a liar). 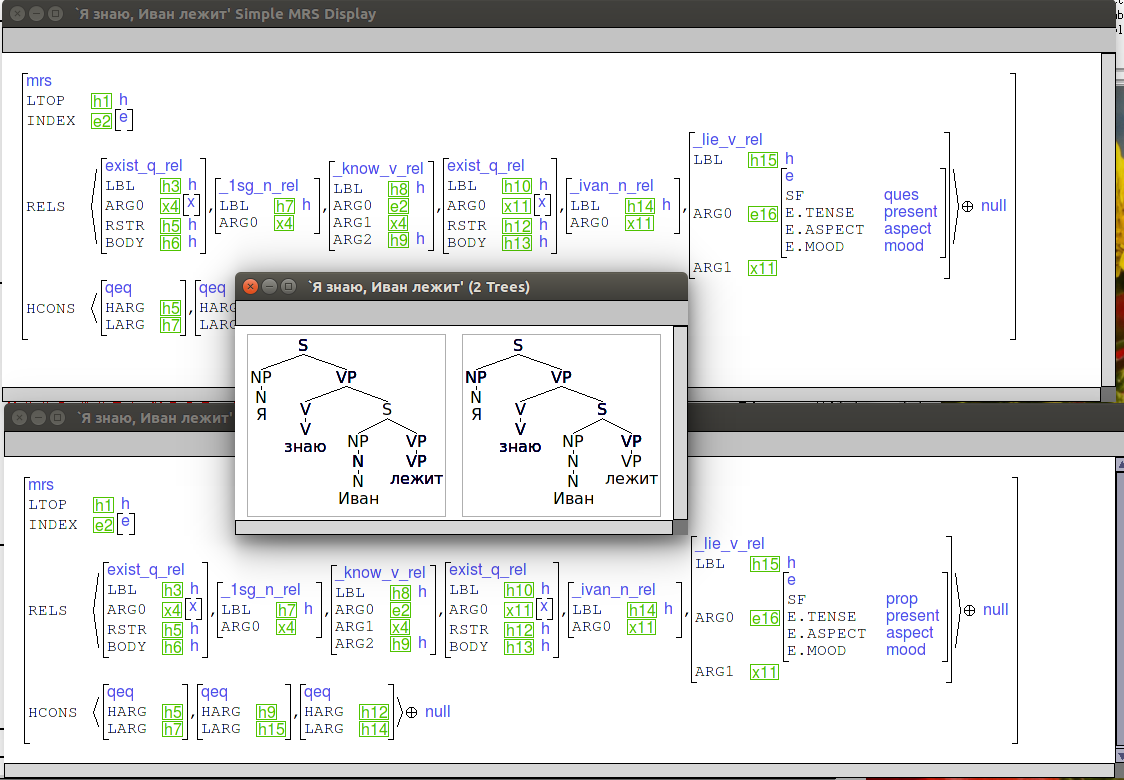 This is because in general, clauses are prop-or-ques. And in main clauses this happens to be correct in Russian, but I am not seeing any sense in the first reading where the embedded Ivan is lying is somehow supposed to be a question.

It’s almost like I want to say: the ques-requiring know takes either [ L-QUE + ] or QUE-nonemtpy complements… But I can’t do that can I?

Not quite because in situ questions will be neither…

To add/clarify, the same issue is currently present with the verbs of ask/wonder type. There will be a spurious(?) reading for sentences like I ask Kim arrived because there is originally the prop-or-ques value on the embedded SF.

I doubt that sentences like I ask: Did Kim arrive? are the same kind of embedding, so the readings are probably spurious.

The only thing I can think of right now in terms of how to solve is is to not assign the prop-or-ques value until later somehow, until it is clear that the clause not embedded. But I don’t know how to do that.

Here’s the ERG parses (there’s two of them): 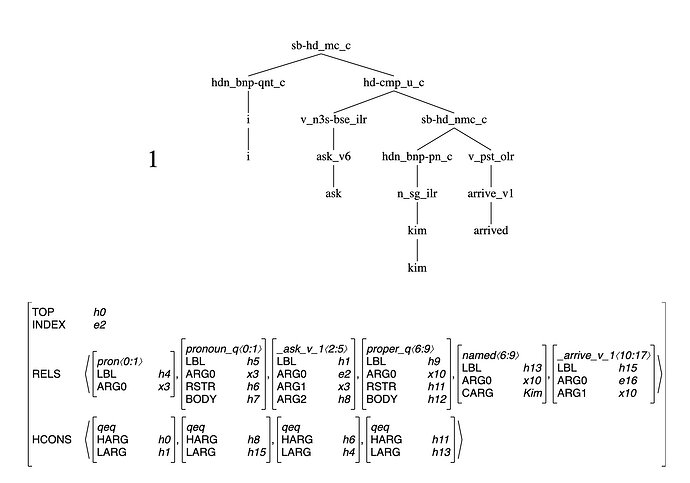 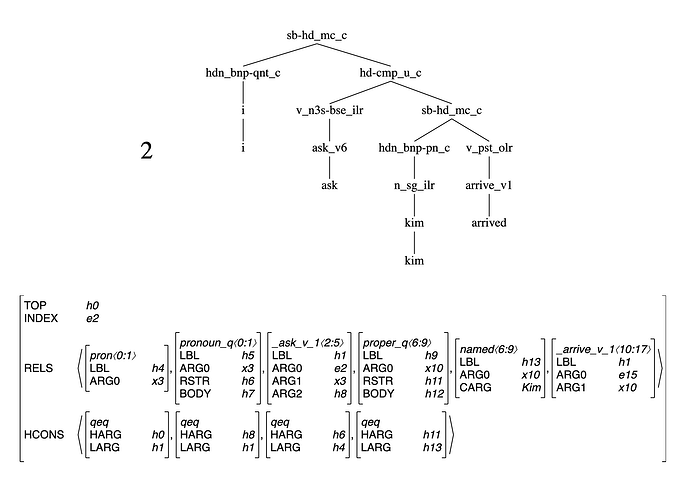 Are they “I ask: Kim arrived?”

I guess the ERG is allowing those parses because “Kim arrived” could be an intonation question?

As for the ambiguity in your first Russian examples, I don’t see what QUE could possibly have to do with it (there’s no wh words here). What is the difference between the two parses? Two different entries for know? If so, I think this might actually be correct in a sense, if somewhat unsatisfying (since “I know Ivan arrived” and “I know whether Ivan arrived” are going to be true in the same situations.)

What is the difference between the two parses? Two different entries for know ?

Yes. It is very hard for me to understand what know should be doing. I removed it from my test suite for now even… Even without know, if I just test on think vs. ask, I have the issue of ask taking complements like Kim arrived because Kim arrived is prop-or-ques. As for I asked: Kim arrived?, that’s not an embedding situation, is it? It’s direct speech, main clause syntax?

So I am not sure I can say that my grammars licensing such sentences is legit. They are licensed by the clausal complements library which is only concerned with subordinate clauses, puts MC - on the embedded clause, asks questions about different word order for languages like German, etc. The whole point of the library is subordinate syntax, it seems.